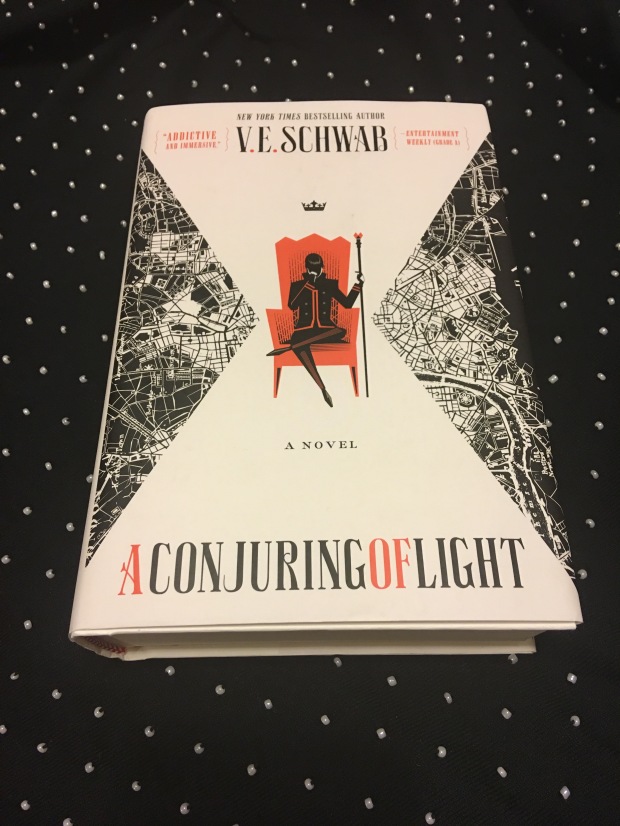 The battle between four magical Londons comes to a head in this stunning finale to the New York Times bestselling Shades of Magic trilogy by rising star V. E. Schwab

Londons fall and kingdoms rise while darkness sweeps the Maresh Empire—and the fraught balance of magic blossoms into dangerous territory while heroes and foes struggle alike. The direct sequel to A Gathering of Shadows, and the final book in the Shades of Magic epic fantasy series, A Conjuring of Light sees Schwab reach a thrilling culmination concerning the fate of beloved protagonists—and old enemies.

About: A Conjuring of Light is a fantasy novel written by V. E. Schwab. It was published on 2/21/17 by Tor Books, an imprint of Macmillan, hardcover, 624 pages. The genres are fantasy, magic, and fiction. There are 3 books to this series: book 1 is called A Darker Shade of Magic, book 2 is called A Gathering of Shadows, and book 3 is called A Conjuring of Light. Another book I read by this author is The Invisible Life of Addie LaRue. According to the publisher’s website, “Tor.com is a site for science fiction, fantasy, and all the things that interest SF and fantasy readers. It publishes original fiction, art, and commentary on science fiction and related subjects by a wide range of writers from all corners of the field; both professionals working in the genres and fans. Its aim is to provoke, encourage, and enable interesting and rewarding conversations with and between its readers.” Please see below for more information about the author and publisher.

My Experience: I started reading A Conjuring of Light on 10/1/17 and finished it on 10/8/17 at midnight. This book is an awesome read! There were actions and adventures and there were suspense and mysteries. Lila is still reckless and dangerous. She gets to explore her mystery to the fullest potential in this book! I love learning about Holland’s past and his role. I have sympathy for him. I also like how he can mask his feelings whereas Kell shows it all on his face. I like Kell and his attempts at romance. However, Kell’s romance doesn’t seem to have as much connection as Alucard’s romance with his lover. I like Alucard in the previous book as well as in this one. He’s a cool character. I love the bickering between Alucard and Kell, the playful words between Rhy and Alucard, and the banter/flirt between Lila and Kell. They all make me smile. I love the magic in this book!

This book continues directly where book 2, A Gathering of Shadows left off. Kell is struggling for his life in White London against the stronghold of Holland, the second Antari. In the meantime, Rhy’s life is in danger because Kell’s life is in danger. Holland once again is in a battle of his own, fighting to regain control of himself. Lila Bard has a new title in this book. She started out as a thief, then a pirate, and now, possibly, an Antari. From book 2, readers know what Holland brought back with him to White London. The new villain invades Red London and leave deaths along the way. Through many attempts at defeating the villain, Osaron, they will have to set out on an adventure to obtain a device that will capture him once and for all. The trip is a bit dangerous because they are venturing out to an illegal place with a prisoner along for the ride. Rhy, prince of Arnesh and Kell’s brother, definitely step up to the challenge in this book. Actually, many characters are tested for strengths and weaknesses and whether they willing to reunite for the greater good or go their separate ways to protect themselves.

This book is very well written. It’s lengthy but not dull. I enjoyed their strategic discussions. I like their attempts and failures at defeating the villain. I like how the characters, no matter whether they trust each other or not, they find a way to work together. I enjoyed the challenges the characters faced. This book answers almost all of my questions from previous books. I still don’t know Lila’s history with her glass eyes and I still don’t know Kell’s past, but Kell chooses not to know whereas Lila still doesn’t know. This book also left me with questions. I thought part of the Shadow King spread his shadows into Grey London because there were requests of “let me in” to Ned Tuttle but it was left opened ended. Also I wonder of White London’s future, who is King? Shades of Magic is definitely an excellent series and I highly recommend everyone to read it!

Victoria is the product of a British mother, a Beverly Hills father, and a southern upbringing. Because of this, she has been known to say “tom-ah-toes,” “like,” and “y’all.”
She also tells stories. She loves fairy tales, and folklore, and stories that make her wonder if the world is really as it seems.
Victoria has stated that books published under V.E. Schwab are adult releases and those under Victoria Schwab are YA.
(Photo & info obtained from Goodreads).

17 thoughts on “A Conjuring of Light Review ”