A twisty tale reminiscent of Jane Austen—with a dash of murder—Cindy Anstey’s Deadly Curious is perfect for fans of Kerri Maniscalco and Agatha Christie.

Some secrets are better left buried…

1834. Sophia Thompson wants nothing more than to be one of the famed Bow Street Runners, London’s most elite corps of detectives. Never mind that a woman has never before joined their ranks—and certainly never mind that her reclusive family has forbidden her from pursuing such an unladylike goal.

She gets the chance to prove her capabilities when an urgent letter arrives from her frantic cousin Daphne, begging Sophia to come look into the suspicious death of Daphne’s brother.

As Sophia begins to unravel the tangled threads of the case—with the help of a charming young policeman—she soon realizes that the murderer may be even closer to her family than she ever suspected.

About: Deadly Curious is a young adult mystery historical fiction written by Cindy Anstey. It will be published on 6/23/2020 by Swoon Reads, an imprint of Macmillan Publishers, 352 pages. The genres are young adult, mystery, and historical fiction. This book is intended for readers ages 13 to 18. According to the publisher’s website, “Swoon Reads publishes the latest and greatest in YA fiction with the help of readers and writers like you. We’re dedicated to the undiscovered, and we seek out the very best in bright, new bookish talent. From heroic epics, to alien adventures, to all-the-feels romance—if you’re loving it, we’ll publish it.” Please see below for more information about the author and publisher. 

My Experience: I started reading Deadly Curious on 6/16/2020 and finished it on 6/23/2020. This book was an excellent read! I like Sophia’s dad and his clever subtle ways of allowing his daughter to do things that others don’t like for their daughters to do. I enjoyed reading this mystery because it was full of actions. Also the ending was a good one because I couldn’t guess who the killer was. I like that the killer’s role in the story was not a minor one where the author mentioned of and then left in the back burner to just later do a tell-all. Now shifting through my mind after the read, I should have been able to catch who the killer was.

This book started with a guy waiting for the right time to take action. Then as he made his move, he thought he was being followed and he ran for it but tripped and fall with someone standing over him as he died. Then the story began in 1834, following Sophia, 18 as she read a letter from her cousin Daphne. Daphne’s brother Andrew has been killed a year ago and the crime remained unsolved. Daphne wanted Sophia to investigate. The second view was Jeremy, 20, a Runner (investigator trainee). He’s assigned to solve Andrew’s murder. Back in the day, ladies busy themselves with ladies activities so it was frowned upon for Sophia to want to become an Investigator.

Deadly Curious was well written and a fast paced read with likable characters. I enjoyed the slow burning romance and it was very innocent throughout the book. I liked reading historical fiction for their sophisticated conversations. I don’t grow up talking like that but I loved reading their well mannered speech. I like Sophia and her determination to reach her goals. Overall, a good mystery and I recommend everyone to read it. 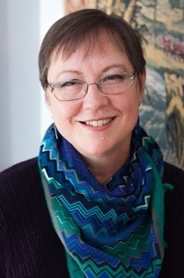 Cindy Anstey spends her days painting with words, flowers, threads, and acrylics. After many years living as an expat in Singapore, Memphis, and Belgium, Cindy now resides with her husband and energetic chocolate Labrador, Chester, in Nova Scotia, Canada. She is the author of Love, Lies and Spies; Duels & Deception; Suitors and Sabotage; Carols and Chaos; The Hummingbird Dagger; and Deadly Curious. (Photo and info obtained from Macmillan’s website).

***Disclaimer: Many thanks to Fierce Reads for the opportunity to read and review. Please be assured that my opinions are honest.