Police officer Ellery Hathaway is on involuntary leave from her job because she shot a murderer in cold blood and refuses to apologize for it. Forced into group therapy for victims of violent crime, Ellery immediately finds higher priorities than “getting in touch with her feelings.”

For one, she suspects a fellow group member may have helped to convict the wrong man for a deadly arson incident years ago. For another, Ellery finds herself in the desperate clutches of a woman who survived a brutal rape. He is still out there, this man with the Spider-Man-like ability to climb through bedroom windows, and his victim beseeches Ellery for help in capturing her attacker.

Ellery seeks advice from her friend, FBI profiler Reed Markham, who liberated her from a killer’s closet when she was a child. Reed remains drawn to this unpredictable woman, the one he rescued but couldn’t quite save. The trouble is, Reed is up for a potential big promotion, and his boss has just one condition for the new job—stay away from Ellery. Ellery ignores all the warnings. Instead, she starts digging around in everyone’s past but her own—a move that, at best, could put her out of work permanently, and at worst, could put her in the city morgue.

About: No Mercy is a mystery thriller written by Joanna Schaffhausen. It will be published on 1/15/2019 by Minotaur Books, an imprint of St. Martin’s Press, paperback, 305 pages. The genres are mystery, thriller, suspense, and fiction. There are three books to the Ellery Hathaway series: book 1 is called The Vanishing Season, book 2 is called No Mercy, and book 3 is All the Best Lies. According to Macmillan’s website, “Minotaur established in 1999, Minotaur is a premier publisher in the bestselling category of crime fiction. St. Martin’s Press has a long and respected history of publishing a solid and varied list. We are dedicated to publishing emerging new authors, and offering a fresh perspective on classic genres, while maintaining a diverse and interesting range of books.” Please see below for more information about the author and publisher.

My Experience: I started reading No Mercy on 10/7/2018 and finished it on 10/16/2018. This book is a fantastic read! The plot is intriguing and I just couldn’t get enough of the main characters’ working relationship, their sharp tongue at each other and at interrogations is exhilarating. I like Ellery’s dog, Speed Bump’s role in both books. It’s been almost a year since I read the first book and I’m glad that the author brings back snippets of what happened scattering around in this book. I like how Ellery continues to move on with her life despite the constant threats she received. I like the career discussions in this story as well as family troubles.

This book is told in the third person point of view following Ellery Hathaway as she makes her way to a group meeting for survivors of violent crimes. She can’t continue her job as a police officer until she attend this meeting the court mandated. At the meeting, she meets Wendy, who was raped but the rapist got away. Ellery also meets Myra, who survived a fire from a burning building while the arsonist stand by to watch. Ellery’s secret life in this book is now all over the news and she can sympathize with these two survivors. Wendy is reaching out to Ellery to help her catch her rapist. The second point of view is Agent Reed Markham, FBI Profiler well known for his role in rescuing one victim from a serial killer. As Ellery digs around the arsonist case, she found herself being threatened and her truck is set on fire.

No Mercy is very well written and a fast paced read! I couldn’t put the book down every time I pick it up because the cases they work on are fascinating. I smile often at the main characters’ witty conversations. The cool part is that more than two people could be accused of the crime. I like that I couldn’t guess who it is. I like the mini cliffhangers. I like Reed Markham and his strong will to stand his ground and not let his boss threaten him with his dream job. I enjoy the detective work and the twists. I like the hint of romance. I highly recommend everyone to read this duology because it’s an addicting read! 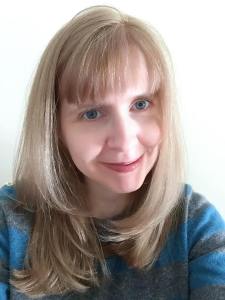 Joanna Schaffhausen wields a mean scalpel, skills developed in her years studying neuroscience. She has a doctorate in psychology, which reflects her long-standing interest in the brain—how it develops and the many ways it can go wrong. Previously, she worked for ABC News, writing for programs such as World News Tonight, Good Morning America, and 20/20. She lives in the Boston area with her husband and daughter. She is also the author of The Vanishing Season.(Photo and info obtained from Macmillan’s website).

***Disclaimer: Many thanks to Minotaur Books for the opportunity to read and review. Please be assured that my opinions are honest.

6 thoughts on “No Mercy Review”

Currently reading multiple books. Can’t help it. I just couldn’t wait to start reading Every Waking Hour by @joannaschaffhausen which was published by @minotaur_books on 1/26/2021 so I started reading it tonight 😍 It’s so good! I’m only 19 pages in and it’s past midnight. Love Reed and Ellery as well as her dog Speed Bump 🥳 I love reading this series. Good suspense and mystery. It’s a thrilling read in every installment. I just learned that the author has a new series with Detective Annalisa titled Gone for Good, will be out 8/10/21 🎉 I’m so excited for the new series and wondered if this is the last book in the Ellery series 🤔 Synopsis: The fourth book in Joanna Schaffhausen's heartpounding Ellery Hathaway mystery series.
King of Scars fans! Here’s your sequel! Rules of Wolves by @lbardugo which will be published on 3/30/21 by @fiercereads 💝 I still haven’t read the entire Grishaverse yet. I have only read Six of Crows and Shadow & Bone and enjoyed both. I will have to plan on reading them all one day 😊 #youngadultbooks #youngadultfiction #youngadultfantasy #yabooks #howusefulitis #rulesofwolves #bookworm #bookstagram #fantasybooks #toread
Last night I saw the movie, The Giver, on Amazon Prime and it was excellent ❤️ I can’t wait to read the book! #thegiver #bookmovieadaptation #middlegradebooks #middlegradefiction #dystopian #sciencefiction #howusefulitis #bookworm #bookstagram #booklover #bibliophile #bookblogger
Just got an email from @fiercereads for @marissameyerauthor new retelling of Rumpelstiltskin 🎉 I’m so excited 🥳 Love the cover!❤️ Synopsis: Marissa Meyer, No. 1 New York Times-bestselling author, returns to the fairytale world with this haunting retelling of Rumpelstiltskin.
Super excited to read Star Eater by #kerstinhall which will be published by @tordotcompub on 6/22/2021 🎉 This book is an adult science fiction fantasy with LGBT and horror, all amazing genres 💝 Synopsis: All martyrdoms are difficult.
I finished reading Bloom by @skinnernic which will be published on 3/16/21 by @harpercollins360 days ago and it was fantastic 💖 Such a unique idea on gardening and how land are covered up with concrete. It reminds me of where I grew up in. Once upon a time it was a dirt road and now it’s all paved over. Then there’s the school that Sorrel attended that required all students to be well behaved. I enjoyed the writing, humor, illustrations, and well developed characters. I recommend everyone to read this book! Detailed review posted on my blog. Thank you #harper360 for the opportunity to read and review. #bloombook #nicolaskinner #mglit #middlegradebooks #middlegradereads #middlegradefiction #magicalrealism #middlegradefantasy #bookworm #bookblogger #bookstagram #bookreview #bookish #booklover #bibliophile #fictionbooks #book #read #howusefulitis