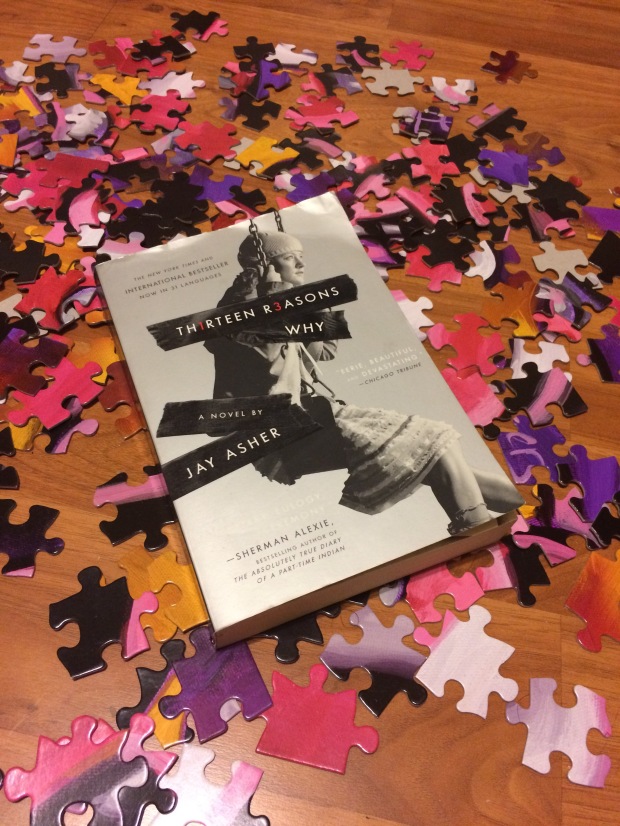 Synopsis from Edelweiss:
You can’t stop the future.

You can’t rewind the past.

The only way to learn the secret…is to press play.

Clay Jensen returns home from school to find a strange package with his name on it lying on his porch. Inside he discovers several cassette tapes recorded by Hannah Baker—his classmate and crush—who committed suicide two weeks earlier. Hannah’s voice tells him that there are thirteen reasons why she decided to end her life. Clay is one of them. If he listens, he’ll find out why.

Clay spends the night crisscrossing his town with Hannah as his guide. He becomes a firsthand witness to Hannah’s pain, and as he follows Hannah’s recorded words throughout his town, what he discovers changes his life forever.

About: Thirteen Reasons Why is a young adult fiction novel written by Jay Asher. It was originally published in 2007 by Razorbill, an imprint of Penguin Group, paperback, 288 pages. The genres are young adult, social themes, and realistic fiction. This book is intended for readers ages 12 and up, grades 7 and up. Razorbill is “dedicated to young adult and middle grade books. We are committed to taking risks and exploring new ways to tell stories”. Please see below for more information about the author.

Spotlight Q&A: ME!
(These are questions Debbie asked me to answer. Click HERE to see our other buddy read where I asked her questions for her to answer).

What is your opinion on how the subject suicide is handled in 13 Reasons Why?

I really like it. It’s presented in a different angle. It’s refreshing. It still deliver the message about suicides and bring awareness to readers. The cassette tapes concept is a great idea! It’s definitely an attention getter.

What is your opinion on Hannah’s situation?

Despite Hannah’s knowledge of who to trust and who’s untrustworthy, I dislike that she still went ahead and did it. She could have prevented herself a lot of trouble if she avoids it. In other areas, I do feel sorry for her, especially when she needed those encouragement notes but it was stolen from her.

Who do you dislike the most from the tapes and why?

I dislike Marcus. He doesn’t have the right to be mad at Tyler because what he does is just as worse and I dislike that he’s not aware of his actions.

What would you have done in Clay’s position?

I would have talked more since he got along with her so well and they had a good conversation going. If he keep up with the conversation and tell her how he feels, she might open up to him more. Also, he should’ve invited her for a walk, leave the party and talk during their walk home.

Would you recommend this book to others and why?

Yes, I still would like to recommend this book to everyone. It delivers a powerful message from teens to teens. It’s easy to read and readers can relate to.

What message do you take away from this book?

Every action has consequences. Compliment more, because some people may have been waiting to hear it and it will do them a world of wonder.

Bonus Question: Will you watch the Netflix show, now that you have read the book?

Yes. I would like to. But I will not be watching it because I have since cancelled my membership with Netflix so that I could focus to read and review more books! haha..

My Experience: I started reading Thirteen Reasons Why on 4/21/17 and finished it on 4/23/17. I am again, super happy to have done a buddy read on this book with Debbie @ Debbie’s Library! I’m thrilled to have read two books with her where we both ended up loving it. I really like reading this book and ended up reading late into the night. I couldn’t put it down. Suspense is what kept me going and I wanted so badly to know who’s next and what happens.

“how important is your security? your privacy? Maybe it’s not as important to you as it was for me, but that’s not for you to decide.” p.89

In this book, readers will follow the point of view of Clay Jensen, a fellow high school student and classmate of Hannah Baker. Hannah recorded 7 cassette tapes of her life where she explained 13 of her reasons. As Clay listens to Hannah’s tapes, he follows to each spot where events happened in her life. He wants to know Hannah’s reasons because he has had a crush on her for a long time but was afraid to speak up. This book is an awesome read because as Clay was listening to Hannah on the tapes, I feel like I am actually hearing her voice rather than reading it and I just couldn’t get enough!

“Now, suddenly, even my own thoughts were being offered up for ridicule.” p.192

This is one book where I can’t mention too much without accidentally revealing the details. I love the plot and characters. I love the cassette tapes concept. It brings my reading experience to a unique level. Every so often, I didn’t care for Clay’s commentary so much because it throws me off balance. I find myself re-reading passages because I was lost on who’s voice I’m following. There were some decisions that Hannah made I don’t agree to, especially her joining Courtney & Bryce’s after party and getting into the car with the cheerleader when she tried to avoid her before. That’s asking for trouble. This book is an excellent read nonetheless and I highly recommend everyone to give it a read!

Con: a bit confused when Clay’s thoughts jumped in everywhere and unexpected

Jay Asher’s debut novel, Thirteen Reasons Why, has appeared regularly on the New York Times bestsellers list for the past nine years. It has sold over 2.5 million copies in the United States alone and is currently in production to be a thirteen-part series on Netflix. His second novel, The Future of Us, was coauthored with Printz Honor winner Carolyn Mackler. He is also the author of the New York Times bestselling novel What Light. His novels have been translated into thirty-seven languages. Visit his blog at http://www.jayasher.blogspot.com and follow him on Twitter @jayasherguy. (Info obtained from Edelweiss & photo obtained from the web).